THE BATTLE OF INGALLS, OKLAHOMA 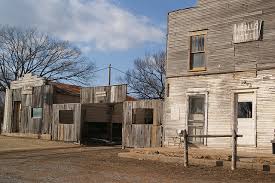 As the ‘old west era’ of cowboys and outlaws was drawing to a close, with horses about to be traded for Model T Fords and six shooters for Thompson machine guns, there was a final great gun battle played out in the wild west tradition. This battle took place on September 1, 1893, in the little-known town of Ingalls in central Oklahoma. The community  tolerated  outlaws staying there, in part due to the boost they brought to the economy and because the bad guys usually conducted themselves reasonably well while taking a respite from their criminal activity. 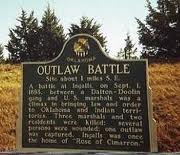 The characters could have been named for the script of an old western movie! On the bad guy side were the infamous gang leader Bill Dalton, “Bittercreek” Newcomb, “Arkansas Tom” Jones, “Dynamite Dick” Clifton, “Little Dick” West, “Tulsa Jack” and several other members of the villainous Doolin-Dalton Gang. The good guys included U.S. Marshal E.D. Nix, who led a force of twenty six law officers, including deputy marshals, members of the Indian Police, and a sheriff from Ford County, Kansas. They rode into Ingalls to capture the gang of notorious bank and train robbers.

On the morning of the battle, the officers entered the town hidden in three wagons. When they hit the ground, the gunfight was on. The Dalton gang had been forewarned by a young boy who had spotted the officers at their camp outside of town the night before.

In a gunfight later described in the Tulsa World newspaper as “more intense than the better-known shootout at the O.K. Corral in Tombstone, Arizona,” the bad guys won the battle. Three officers, Richard Speed, Thomas Hueston (left), and (Lafe) Lafayette Shadley (right) were killed. In addition, a bystander and a 14-year old boy lay dead. Not a single bad guy lost his life and only one was captured.

All three of the officers were U.S. Marshals; they are each listed on the National Law Enforcement Memorial as killed in the line-of-duty. (http://www.nleomf.org/officers/search/search-results/search.jsp?query=shadley&typeID=73802685&x=11&y=12) 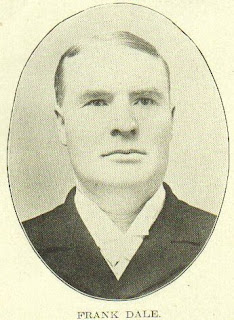 But winning the battle, as any warrior knows, is not winning the war. A territorial judge by the name of Frank Dale was so incensed at the murders that he ordered the marshals to “Bring them in dead. Quit trying to bring them in as prisoners. Dead outlaws are preferable to dead lawmen.”
Apparently the marshals took his order seriously. By 1897 all of the bad guys but one, Arkansas Tom, had been killed by the good guys. Arkansas Tom served time in prison and was eventually killed during a bank robbery in Missouri.
As always happens with crimes, criminals and the cops who chase them, eventually the good guys won.
Although not a tourist attraction, the community of Ingalls continues to exist and some of the old buildings are still standing.