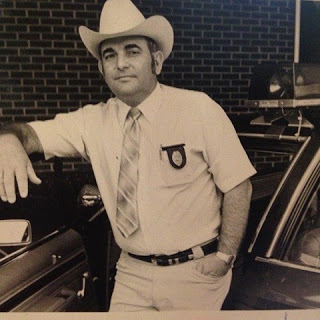 Billy Neal moved from deep East Texas to Vidor when his wife, Sue, got a job there as a teacher. He drove a truck for a construction company. The problem was, it rained so much he couldn’t get a full weeks pay more often than not. So Billy, at the age of twenty-two, drove to the neighboring town of Nederland to see his friend, Bill Pardon, who was the City’s Assistant Police Chief. He hoped his friend would have advice about a job that didn’t depend on sunshine.
“We’ve got a job for a patrolman,” his friend said. “If you want it, it’s yours.”
“I don’t know anything about police work. I’ve never even sat in a police car,” the future police chief responded.
Apparently never having been in a police car was qualification enough, because the following week, Billy Neal was the night shift patrol officer for the Nederland Police Department. He didn’t know how to write a ticket and when he made calls for police service, he had to rely on common sense, because he had no training. After a couple of weeks, they sent him for a week of training. Neal took the job just to tide him over financially until he could find other work.
When he told his wife he’d taken the job as a policeman she wasn’t happy. “Oh, no you’re not taking that job. I’ll never be married to a policeman,” Sue told him. She eventually relented, as long as he stayed only until he found other employment.
His wife continued to suggest other jobs he might pursue, but after a few months he quit looking. Billy Neal said he loved the work. He insists that until his last day, he was always eager to go to work and never remembers a time that he was unhappy with the job. When he quit looking for other careers though, he needed an excuse. The City had bought him some uniforms, so he rationalized that after they spent that much money on him, it would not be right to quit right away.
Two years later, at the age of twenty-four, both his friend Pardon and the Chief left the Department. The City hired a Chief from another town, but he didn’t last long. The City Council offered Billy the position with a $175 a month raise and a trip to Texas A&M University for a crash course on how to be a better policeman.
When he became police chief, Billy Neal was the youngest chief ever appointed in Texas. Forty-one years later, when he retired, he was (and probably still is) the longest serving police chief. His successor, Chief Darrell Bush, says he believes Neal is actually the longest serving police chief in the nation, but such records don’t exist, making it difficult to verify.
Neal served as Nederland’s Police Chief from 1960 to 2001, I asked him about the famous James Commission investigation that occurred in Jefferson County (where Nederland is located) during the 1960’s. The investigation was initiated to ferret out police corruption related to prostitution and gambling, mostly in Beaumont and Port Arthur. Two police chiefs and a sheriff, along with other officers, lost their jobs as a result of the investigation and stories about the corruption were published throughout the nation. 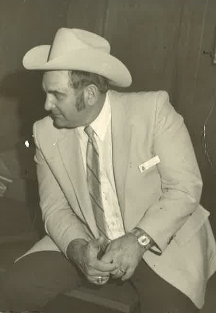 Chief Neal said the investigation never really got to Nederland, mainly because there were no whorehouses or gambling joints in the City. He said his only encounter with corruption was shortly after he became Chief. A housewife called and complained that her husband was losing money every week when he went to a local bar and gambled in the back room. The Chief drove to the bar on a Friday evening and marched through the establishment to the back room, where he found the bar owner overseeing a gaming operation. He told the owner there would be no arrests that night, but that it was the last gambling he expected to take place there.
The businessman followed him out of the bar and asked, “How much do I need to pay you each month to keep my operation going?” The Chief repeated his no more gambling edict and told the man that offers of bribes landed people in jail. It was the last problem he had with that operation.
What about the Nederland Police Department’s reaction to the Civil Rights Movement in the 1960’s? Chief Neal said there was little unrest in his City. There was one neighborhood made up primarily of black residents.  He recalled only one conversation with the local NAACP during which both he and the representative made their positions clear, but there was no trouble. Chief Neal said he believed that was the case because of his approach to police work. He always believed and told his officers to treat everyone you come in contact with, the way you want to be treated. The Chief quickly added that he also made sure his officers understood they did not have to take abuse from anyone, regardless of race or any other factor.
Chief Neal always tried to take care of his officers and he was disappointed when he learned that they formed an association and were pursuing the right to collective bargaining. He’d never lost a political battle in his town. This would be the first time.
“This whole county is really union friendly and the voters agreed to let my guys form a union. It worked out alright though. I still ran the Department and they got some good pay raises. Once it was done, when I saw their union rep, I walked up to him and simply said, ‘Take care of my boys’,” the Chief said without a hint of animosity.
One of the Chief’s most memorable incidents was also the only occasion he ever wore a bullet-proof vest. A local resident shot and killed a woman, then barricaded himself inside the home. Officers arrived and surrounded the house. Meanwhile, Chief Neal obtained the phone number and called the man. A few minutes conversation allowed the Chief to establish rapport with him. He knew it had occurred when the man told him, “Chief, you might want to tell your officers they’re surrounding the wrong home. I’m next door to where they are.”
The Chief laughed as he told the story, but it didn’t end there. The man refused to lay down his pistol and come outside, saying he believed the officers would kill him. He insisted that the Chief come to the scene, enter the home and walk out with him. That’s when the Chief donned the bullet-proof vest.
When he arrived at the scene, he was met by Assistant Chief Kenneth Secrest. “What are we going to do if he shoots you?” the Assistant Chief asked.
Chief Neal didn’t waste words. “Kill him,” he said, as he began what he described as one of the longest walks of his life. It was only a few yards from the street to the house, but it seemed like miles. Chief Neal admitted to the fear he would be killed, but he got in the door and subdued the man. He said it was very little physical activity, but because of the adrenalin rush, he was worn out. When other officers took custody of the suspect he had to sit down for a few minutes.

The Chief credits his wife, Sue, with raising their three children almost by herself because he spent so much time at the Police Department. She was a school teacher in Nederland for thirty years. Their two daughters and son are all involved in education as well and have remained in their parents adopted town of Nederland. 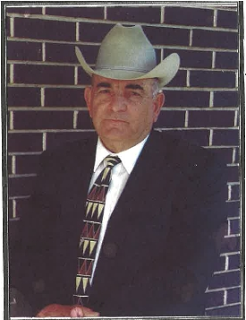 Chief Billy Neal was an “accidental” police officer. He didn’t grow up with a burning desire to wear the badge. He, like so many others, simply stumbled into the career. His easy going manner and philosophy of treating everyone like he wants to be treated, caused him to excel, not only as police officer and chief, but as a man.
“I really didn’t want to retire,” he said, “but I knew it was time. “A year later I ran for City Council in Nederland and have served there ever since.” He’s eighty years old now and shows little sign of slowing down.
“I’m proud that during my time as Chief I got to build a new police station and increase the number of officers. When I walk in today, I still feel like it’s my Department, although it’s now in the very capable hands of Chief Darrell Bush, my long-time personal friend and successor.”
It’s obvious that those at the Department today understand that too. They still address him as Chief even though he’s been retired for nearly fifteen years.

Posted September 14, 2015 by Larry Watts in category "Other