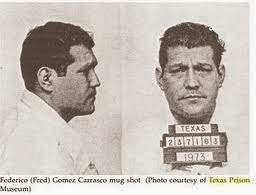 Some people are just born to be bad! Like pornography, Fred (El Señor) Gomez Carrasco, had no social redeeming value. Long before our current concern with drug dealers’ murderous wars along the Mexican border, he became infamous as a drug dealer who had no qualms about murdering his competitors, his accomplices, or the cops who chased him. A book was written about him, law enforcement officers and prosecutors spent thousands of hours trying to put him away, and his path was strewn with dozens of dead bodies as he built his drug empire in the late 60’s and early 70’s. 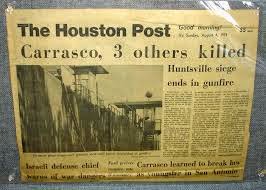 We know him better, however, for being the Texas prison inmate who led the longest prison siege in U.S. history, at the historical Walls Unit of the Texas Prison System in Huntsville. Before it ended, two of his hostages, one of his accomplices, and Carrasco all lay dead on a ramp leading to his get-away transportation, an armored car.
Fred Gomez Carrasco grew up in San Antonio. He became the most successful heroin and cocaine dealer along the Texas and Mexico border. To accomplish this he and his organization left dozens of bodies, both friend and foe, in Laredo, San Antonio and across the nation. There is little accounting of how many more murders took place in Mexico at his hands or direction. Many of these killings were the result of drug wars with other gangs. He was personally suspected of having murdered forty-seven people.
In 1972 Carrasco was arrested in Guadalajara with over two hundred pounds of heroin. He had garnered the attention of two high-profile San Antonio cops, Bill Weilbacher and Manuel Ortiz. Weilbacher, who was described in a Texas Monthly article written by Gregory Curtis as “street smart, mean, and larger than life,” attempted to visit him in the Mexican jail, but was thrown into the cell with him for a short time. The two men were aggressive adversaries. Carrasco escaped from the Mexican prison becoming a fugitive just three months after his arrest.
By July of 1973, Carrasco was arrested in San Antonio. During the arrest he was shot four times by a San Antonio police lieutenant. While in jail, he turned the tables on the two cops for a short period of time by convincing the lieutenant who shot him that Weilbacher and Ortiz had murdered two of his underlings, even though it was he, himself, who had committed the murders. His bravado was without equal, but the witness he produced was soon proven a liar and the grand jury investigating the cops issued a report saying there was not a scintilla of evidenceagainst them. The incident caused a fracture in relationships between some San Antonio officers, that apparently faded with the exoneration of the two hard-boiled investigators.
Now incarcerated in Texas, Carrasco soon pled guilty to a murder and was given a life sentence in return for the release of his wife, Rosa. She was being held on a charge of aggravated assault on a police officer. She was apparently also the only person Carrasco held dear. Even though his lawyers believed that both he and Rosa could beat the charges, he refused to gamble with his wife’s freedom.
Carrasco was sent to Huntsville, where he planned and orchestrated the taking of fourteen hostages, ten of them prison workers, in order to demand his release from prison. After eleven days, the hostage-takers made their move to leave the prison. Law enforcement and prison officials used high pressure fire hoses to disrupt the escape, but as the siege ended, two female prison librarians lost their lives. Elizabeth Beseda had been handcuffed to Carrasco. He murdered her before taking his own life when he realized the escape attempt had failed. Julia Standley was handcuffed to one of Carrasco’s two partners and she was murdered also. One of his partners was killed by gunfire when officials intervened. The other was captured and was eventually put to death, just a few feet from where the attempted escape ended.
It was an eleven day hostage negotiation, but on the national level it was not the lead story. The Watergate scandal was winding down; President Richard Nixon was about to resign. Except for the memory of the two murdered hostages and for ensuring the good reputations of the two San Antonio police officers, maybe the Carrasco story should have been overshadowed by other events. He was just a murderous thug who left mayhem wherever he went.
To learn more about Texas prisons, including books written on the subject, visit the website for the Texas Prison Museum at http://www.txprisonmuseum.org/index.html