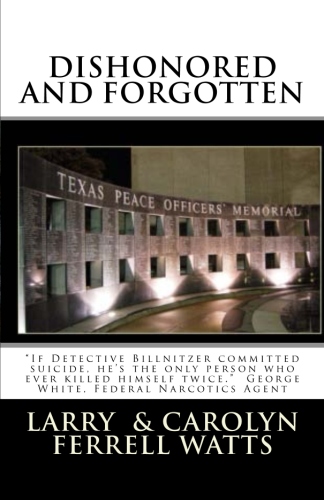 It’s still a mystery.  Can anything be done about it today?  That’s the bottom line question.  Get a copy of the book and make up your own mind.

I bought my copy Thursday, January 12, 2017, at the HPROA meeting from Larry and Carolyn.  They autographed my copy – the first signed copy.  I think the best way to order yours is from Larry’s website.

I read this book in one sitting.  That’s a rare thing for me.  It took the afternoon and a little of the early evening but I didn’t notice too much.  I didn’t realize exactly what I was doing until I was through.  That pretty well tells you how good I think the book is.  Trying to sort out exactly what I think and feel about what happened is totally different.

The fiction part of this book is pretty much in how the story is told.  It’s not in the basic discoverable facts of what happened.  See the website for more of the “back story”.

I joined HPD in 1968 as part of Class 38 and retired in January of 1991.  I was a street cop for almost seven years before going to the Vice Division for a year then promoting to Detective in the Robbery Division in 1975 where I spent the rest of my HPD career.  I suffer from no illusions at all about police officers or police procedures.

Over the years I had heard a few comments about this killing and those were from very senior officers and detectives who were loath to talk about it.  Now I understand why.

A fundamental truth:  Times change.  It is a very grave error, in my not so humble opinion, and one of utmost unfairness – to apply another era’s standards to any given incident.  You have to judge the “rightness or wrongness” of past events in the social context in which they happened.  That does NOT mean you don’t learn and change things.

To try to understand or judge past events using current social conditions, mores and morals is a mistake.  What today are totally unacceptable actions were then considered to be the proper and right things to do given the specific circumstances in which they occurred.

“Best practices” in the 1950’s worked well then but certainly are not acceptable now.

For instance, to condemn the practice outlined in the story of using captured contraband in order to make the absolutely necessary informant system work is wrong.  In a social, political and administrative situation where there was no way to pay informants, officers were faced with choosing whether or not to fight the narcotics trade at all.  There was only the one solution available to officers all across the nation and they used it.  Almost all of them did it following the unofficial but “correct” guidelines established.  They did the best they could with what they had to work with at the time.  The few that “abused the system” – as usual – screwed it up for everybody else.

Having said that – murder, especially for profit, is dead wrong [pun intended] – in any time or situation.  The killing of a police officer in the police station raises it to a whole new level.

At first glance, it would appear that Det. Martin Billnitzer was murdered in his office on the second floor of the main police station at 61 Riesner Street and that the declaration of the killing was a suicide seems a blatant cover-up.

Almost all of the folks that ever mentioned it around me talked of it as a suicide involving a federal narcotics investigation.  That was the “public” version.

However, a couple mentioned that he was shot twice.  They didn’t think a suicidal person could shoot themselves twice.  It’s extremely rare but it’s possible.  There are at least two multiple shot suicide cases that have occurred in Harris County.  The key, I think, is in exactly where the wounds in the chest/heart area were.

Many years after I retired a good friend of mine [now deceased] mentioned to me something that happened at the time of the killing.  A friend of his [who was deceased at the time he was telling me the story] had been nearby when the shots were heard and had seen another officer [now deceased] heading down the back stairs just around the corner from where the killing took place.

There is still some kind of a case file somewhere.  Chief Breashears had it reviewed when he was chief and decided that there was nothing that could be done then about changing the status at that time.

So, we’re back around to the bottom line question:  Can anything be done about it today after all of this time?  If Billnitzer was murdered he certainly deserves to be included in the Line of Duty roster, I think.

But there’s a whole lot more to the story.

Get a copy of the book and see what you think!

AN INTERVIEW WITH THE AUTHORS

Posted February 1, 2017 by admin in category "Crimes and Criminals", "Other