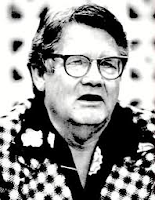 But most of all, he was a self-absorbed egotist. After serving his prison terms, he never stopped inventing bizarre murder plots involving President Johnson. From the federal inspector to President Kennedy, Estes eventually accused Johnson of ordering eight murders.  Many believed he created these sensational stories to promote a book he wrote as well as one written by his daughter. I would like to recommend more reading for those who are interested, but even the titles of the two books written by Estes and his daughter suggest only more self-promotion.
He never attended college, but amassed a fortune, conning politicians, bankers, and the government, with his smooth talk and enthusiastic personality. Billie Sol Estes died in May this year at home in Granbury, Texas. There will be others like him; but there’ll never be another Billie Sol Estes.

Posted October 7, 2013 by Larry Watts in category "Crimes and Criminals", "Other