This blog focuses on stories about crimes, criminals and law enforcement personalities. Today’s story may stretch the limits of these three categories, although some readers will classify Comstock as a criminal and others as a law enforcement officer. 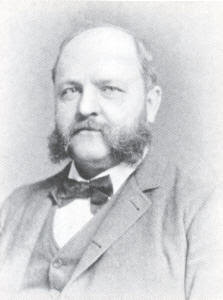 Anthony Comstock lived from 1844 to 1915. He is described in various writings as a moralist, puritan, devout Christian, American prude, self-appointed regulator of American morality and a bastard. He qualifies as a subject of this blog because he is reported to have been appointed a special agent and Postal Inspector for the U.S. Postal Service.
Comstock, after serving as a Union soldier in the Civil War, began a one man crusade against pornography, which he very broadly defined to include anatomical drawings of male and female bodies for use in medical schools, birth control and any other human activity that he determined was immoral. He lobbied Congress for anti-obscenity laws which were passed in 1873 and became known as the ‘Comstock Law’. As a result he managed to be appointed as a special agent to help enforce these laws.
George Bernard Shaw used the term ‘comstockery’ to define the obscenity law and said, “Comstockery is the world’s standing joke at the expense of the United States. Europe likes to hear of such things. It confirms the deep-seated conviction of the Old World that America is a provincial place, a second-rate country-town civilization after all.”
Comstock’s investigative tactics, prosecutions and public condemnation of those he targeted led one woman, Ida Craddick, to commit suicide just before she was to report to federal prison for authoring and distributing sexually explicit sex manuals through the U.S. mail. Comstock bragged that he was responsible for as many as 15 such suicides in his ‘fight for the young’.
Not all citizens, however, were put off by his work. A young J. Edgar Hoover, while a law student, discovered and researched Comstock’s methods of work. Some believe that Hoover modeled his own moral crusades as the Director of the F.B.I. on those of Comstock. One writer even says that Hoover would become Anthony Comstock’s ‘most fearsome’ supporter with his own moral crusade against “Un-Americanism’ in which he used the same investigative tactics pioneered by Comstock.
I encourage every reader to comment on this article and tell me, was Comstock a rogue or was he a law enforcement officer? Please also check out my other writing at http://www.LarryWatts.net where you can read the first chapter of ‘Cheating Justice’ my new novel about the Texas justice system.