(June 1954) A month earlier the media and Houston Police Chief L.D. Morrison learned that the federal government had sent agents to Houston to investigate allegations of missing heroin from the police department. The officers who recovered the dope and the dealer who bought it back told the feds there was about $75,000 worth of heroin, nearly ¾ of a million in today’s dollars.

But the Chief, City Attorney Will Sears and Captain Foy Melton said it was not more than $2,000 worth of dope. Morrison admitted that a single detective, acting alone, sold some of the dope back on the streets. But that detective, Sidney Smith, didn’t work in the Vice Squad and the Chief never explained how Smith obtained the dope that was reported to be in Assistant Chief George Seber’s office. It smelled like a cover-up and it was! Eventually the top cops would turn over more dope to the feds, but not all of it.

On Thursday, June 3rd Detective Martin Billnitzer was found shot to death in an office at the police station. He had two bullets in his heart and a nasty gash on his head. Chief Morrison, the City Attorney, and a local justice of the peace declared it to be a suicide. Many others, including the officers who worked with him, the federal investigators, and his family believed that he had been murdered. The following Saturday, Morrison issued an order to all police officers that they were prohibited from talking to anyone, including federal agents, about the heroin or death of Detective Billnitzer. He declared he would answer all questions.

Detective Sidney Smith was fired and charged with selling heroin. He was eventually convicted and sent to prison. When interviewed in prison by federal investigators, he said that Detective Billnitzer was murdered and that the pistol used had been stolen from a store and used to kill the detective. Houston Police records indicated it was Billnitzer’s personal weapon.


Captain Foy Melton and a local doctor, Julius McBride, were indicted on June 25th. The doctor was charged with supplyng Chief Morrison with codeine for purposes other than medical use. He was eventually sentenced to 30 months in federal prison. Morrison was not charged, but testimony at McBride’s trial indicated he was addicted to codeine. He resigned as Chief of Police, but remained on the department.

Captain Melton was tried twice on the federal charges. First in Brownsville, then in Corpus Christi, juries could not reach a verdict. L.D. Morrison testified on his behalf. Melton appealed his suspension to the civil service commission and was promptly returned to duty.
Melton was charged a few years later with tampering with a witness and bribery on an unrelated case. He was found innocent of those charges, but his firing was upheld by the Houston Civil Service Commission. Melton appealed that decision and eventually the Texas Supreme Court reversed the decision and he was authorized to return to work as a Houston police officer. He opted instead to retire and began receiving his $187.42 per month pension. He was soon hired by District Attorney Frank Briscoe as an investigator.
On February 2, 1967, Melton pulled into the parking lot of the Harris County Courthouse and shot himself while sitting in his car.  He left two notes which were found in his pocket. A .45 caliber automatic pistol lay on the seat beside his body.

On one note was written “Medical Examiner: When you finish, call Heights.” This apparently referred to the Heights Funeral Home in Houston. The second note said “Homicide: Let R.O. Biggs have this .45 automatic. God Bless You All. Foy D. Melton.”Melton had succeeded where all others had failed. He had finally been removed from the ranks of law enforcement. 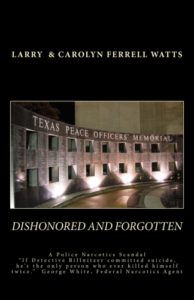 My new book, Dishonored and Forgotten will be available by late October.  It is the story of Houston’s first narcotics corruption case which led to the events told above.