From 1896 to 1904 A.B. Shackleton worked as a deputy sheriff and a constable. In 1903, he decided to run against his boss and incumbent sheriff of Lunenburg County, Virginia, C.S. Bagley who had hired Shackleton as a deputy when he was first elected. The deputy defeated his former boss in that election and remained sheriff until his retirement at the age of eighty-three in 1955.

I first heard of Sheriff Shackleton when a friend sent me a magazine he found in old family papers. It was The National Sheriff magazine of August-September, 1951. Sheriff Shackleton shared the front page of the magazine with a twenty-two year old sheriff from Scott County, Kansas. The headline was ‘The Oldest and the Youngest’ and the magazine declared that Shackleton, at 79, was the oldest sheriff in the nation. 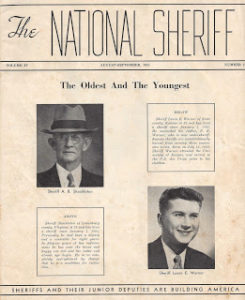 A 1946 bulletin of the FBI reported that the Sheriff was one of the most popular men in Lunenburg County and was more familiarly known there as ‘Shack’. The bulletin also reported that during his tenure as sheriff from 1904 until the article was written in 1946 there were only two major unsolved crimes in his jurisdiction.

There are several newspaper accounts of the Sheriff’s exploits in law enforcement. In 1910 he is reported to have arrested a black man who was accused of attempting to attack the eight year old daughter of a prominent citizen. Under the cover of darkness, Sheriff Shack spirited the inmate from Lunenburg County to a jail in another city to prevent the suspect from being lynched by an angry mob. 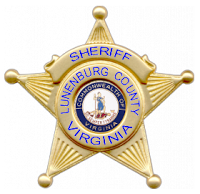 In 1937 Sheriff Shack arrested a member of a prominent Virginia family for taking part in a bank robbery. A bank employee was shot during the robbery. The publicity surrounding the crime prompted the Virginia legislature to begin a movement to establish a state police radio and teletype system to aid officers in the battle against such brazen crimes committed in the glare of daylight.
When he retired, he is reported to have said that he’d been in office longer than any other sheriff in the nation. He also said that, “people are not any worse now than they used to be.”

Sheriff Shack began his law enforcement career in the horse and buggy era of transportation, when bare knuckles, fast shooting, and a hangman’s rope ended many crime sprees. When he retired, police radios, radar, and polygraph (lie detector) machines were in use. There were rumors of atomic wars and still to come was the age of high-tech computers,  GPS systems, Tasers, DNA evidence, drones and rubber bullets. If he was still with us, my guess is that Sheriff Shack would accept these new law enforcement tools as just a part of the ever improving science associated with his life-long profession.

Sheriff Shack, a life-long resident of Lunenburg County, married his sweetheart, Mary Belle, just a year after being elected sheriff. Mary Belle was also a native of the county. When asked what he was going to do in retirement at the age of 83, Shack simply said, “I’m going to stay home with my pretty wife.” He did just that until his death three years later in 1958.