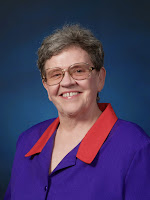 Now here’s a profile in courage! Majel Redick had a pretty routine life going until 2008; college, business woman, happy marriage, and then the unthinkable happened. She underwent brain surgery which left her hearing impaired and legally blind. What’s a girl to do?

Of course, there were several options. But not for Majel; she was a Ripley Warrior! Now being a Ripley Warrior won’t mean much to most people who read this; but Majel grew up in the small town of Ripley, Oklahoma and the high school sports teams were called the “Warriors”. She must have read the quote that was framed and hung in the gymnasium there for all the years she was a student. It read,

For when the One Great Scorer comes
To write against your name,
He marks-not that you won or lost-
But how you played the game.

Well, Majel didn’t win the game against blindness, but she did what any great warrior would do when faced with adversity. She continued to play the game and make new rules. Now that she was legally blind, she would take up writing! And write she does!

Her first book, From the Porch, published in 2011, is currently available at Amazon.com or Barnes & Noble. I’ve read it and it meets my simple standard. Once I started reading, I didn’t want to stop. It’s actually three short-stories with a common thread, and one of the three, Squirt’s Kite, won an award from the North Texas Professional Writers Association. Majel has also published other short-stories and poems. This year she published her first novel. 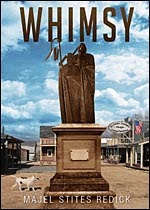 As Majel describes Whimsy in her always humorous manner,
“It has intrigue, humor, hookers, blacks, gays, Indians, gorgeous blonds, handsome older men, babies and dogs. Well, I may have exaggerated about the hookers. And maybe fantasized about the handsome men. But almost all the rest is— well, part of it – Oh, meanwhile grab a rockin’ chair and rock on in and read some good stuff that follows”.
I haven’t read Whimsy yet, but my wife has. Here’s what she says. “Ms. Redick’s book, Whimsy, transported me to one of those quaint rural communities that urbanites often long for as an escape….She continues to tell her stories in the witty, wise style of Garrison Keillor. There’s a theme and lesson throughout the book of acceptance and love for one another, as well as finding joy in life.” Carolyn Watts
Order Whimsy on Majel’s website where you can read more at http://majredick.tateauthor.com/2013/07/08/post/#more-19and pick up her other book at Amazon.com.