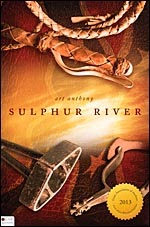 Sulphur River, Art Anthony’s first novel, is a historical story about the Civil War. If you are a civil war buff, or just enjoy a good story, this is one worth checking out. It’s the fictional account of two young men who serve in the Confederate Army during the “Red River Campaign”. Anthony’s research, detailed account of battles, and the daily life of a soldier during this period, make the story even more interesting.

The author is a native Texan, having been born in Goose Creek (now known as Baytown). He currently lives in Tuttle, Oklahoma, a suburb of Oklahoma City. Anthony has a diverse background, having worked in agriculture, manufacturing and marketing before spending 23 years as an educator, retiring as superintendent of a school district in Illinois.

Sulphur River is written in narrative journalism style. For those not familiar with this style of writing, sometimes referred to as literary journalism, it is story-telling without or with very little dialogue. Although not utilized to a great extent today, some famous authors have used the characteristics of this style of writing.

Truman Capote claimed to be the inventor of this form of journalism with his novel, In Cold Blood, however, many observers trace its origin to well before Capote’s work.  Some of the characteristics of this style are evident as early as the 18thcentury in Daniel Defoe’s writing and during the 19th century by Mark Twain. More recently, both Ernest Hemingway and John Steinbeck employed it in some of their writing.
I asked Art a few questions about his experience writing.
Why did you decide to write your first novel in narrative style?

Anthony: “I wanted to try narrative, because it’s a style you don’t see anymore. The sequel, Return to Sulphur River, is written in a more traditional, dialogue style. ”

How extensive was the research involved in writing Sulphur River?

Anthony: “A lot! I made a ten day trip down the Red River in Louisiana. I then spent time at the Norman (Oklahoma) Public Library where I found three very old, dusty books that hadn’t been opened in many years. The books even contained some of the officers’ notes and dispatches. I spent three months pouring over this treasure. Finally, I had worked on a ranch in the area, that I then recreated in the novel a hundred years earlier.”

What are you working on now? 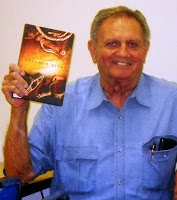 Anthony: “The sequel, Return to Sulphur River, which should be out in December. I am also working on a pioneer western set in Anahuac, Texas from 1828 to 1837.”

What was your greatest discovery from writing and publishing your first novel?

Anthony: “You must have a strong conviction and be prepared to work hard selling your work to the public.”

Finally, what advice would you give to a novice writer?

Anthony: “If you want to write, do it! If you don’t, you will never forgive yourself.”